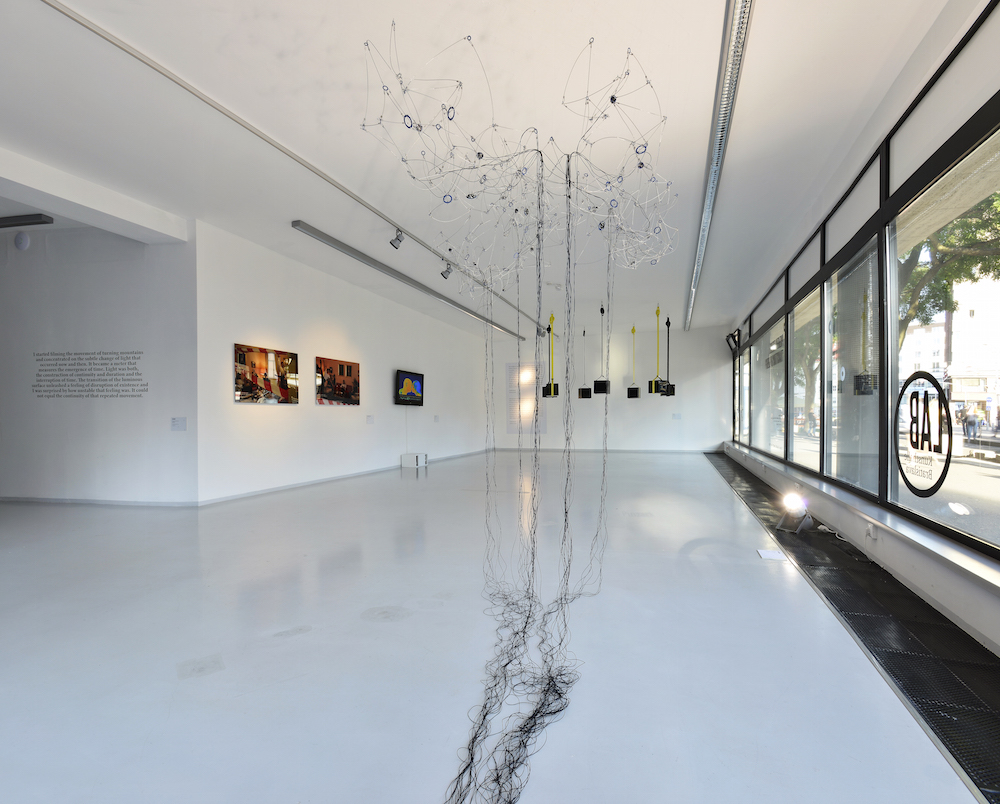 2014
Media Sound Installation
Steel cable, mini speakers, stereo sound in loop – electronic voicest; variable size (about 200cm x 300cm x 240cm)
​
Exhibition views at Kunsthalle LAB Bratislava © Martin Marenčin
​
​Personal insights and public crises of social structures are depicted in the daily flow of nowadays communications, specifically in internet social networks. This osmotic and permeable matter that expands from electronic and wireless artefacts is travelling at different frequencies around us. The artwork comments on the density of this invisible traffic reflecting messages captured wall to wall. The immersive ethereal network structures follow the concept and diagrams of distributed networks as suggested by engineer Paul Baran in the 1960s. The emitter environment displays a sound collage in which narratives originating in the internet social networks are randomly overlapping. The collage, an embodiment of virtual creatures, whispers intimate messages and news. The machine voices attempt to deconstruct the original data expanding it into a new fictional reality.
​
​
Press text: Lorella Scacco, art critic & curator
​
Juliana Herrero investigates the current boundaries between the public and the private sphere using found footage from social networks, which she reworks, questioning the current meaning of Truth. Her floating “soundscapes”, as in Milieu (2014), are made of steel cables and mini speakers. Milieu transmits audibly reworked intimate messages and news coming from the community. The texts are translated into machine voices through an open source software. Here, the sound collage of public and private information created by the artist highlights the contradiction of the latest social media platforms, which blur and dematerialize the boundaries between our inner and outer worlds. Herrero goes as far as wondering whether there are specific sounds for the public and private realm and whether these are still separate domains in our interconnected society. Plateaus (2015) offers another acoustic sound naming fictional cities taken from various Internet databases and translated into human voice. Here, the human voice contrasts with the artificial names. In both media installations, the shadow cast by the networks of cables on the walls or on the floor amplifies vision and highlights the notion of virtuality underpinning these works. These pieces are fragile, ephemeral, like he essence of clouds, to which they are likened owing to their visual form; they are both fictional and real, like virtual reality. The artist declares: “In my work I attempt to emotionally provoke the audience while leaving an “empty space” for the imagination.” This statement seems to do away with the criticism raised by sociologist Jean Baudrillard against virtual reality, which, he claimed, killed illusion.1 In her video installation Invisible Cities (2013), a reworked political map of Eastern Europe oscillates between reality and illusion thanks to the alternating sounds of heartbeat and snoring during sleep. A stream of human energy sparks life into geopolitics by focusing attention on the people inhabiting these territories.
​
Moving from Alexander Calder’s hanging mobiles, Herrero’s sculpture installations mark a new conceptual development; despite them being static, they release kinetic energy from within thanks to sound vibrations and constant dialogue between analog and digital technology.